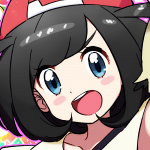 Hello. I'm Rylee. I'm 16 years old, and currently attending high school. I like to draw a lot, though I never really know who I'm drawing. I'm no one special, really. Just your average pyromaniac. Perhaps with a little something else thrown in, but who knows who's corrupted me over the years.

All of her hair has been chopped off, manually of course, and is currently in a boyish cut. It's of a dark dishwater blonde currently, and is often quite messy. Her eyes are a mix of stormy grey and crimson red, as apposed to the previous grey that they had once possessed. Her skin is very lightly tanned, and she possesses many scars over her body, most notably one around her neck, which carries from earlier this year.

Rylee has a sheath for both Sirachi and Seres, Sirachi is around her waist whilst Seres is kept in its long sword form on her back. They both are black sheathes, to better blend with her monochrome outfit.

She keeps to a black sundress, reaching down to the knees, with a white sash tied around the waist of it. Its sleeves keep to only covering her shoulders, and she is sometimes seen wearing a long black overcoat. She now wears black army-grade combat boots, claiming that they're easier to move in.

Rylee is more of close-combat fighter, resorting to her own powers only for distractions and to get enemies out of her reach. She uses only her long sword during combat, oftentimes claiming to spare her enemies if they allow her to make a meal out of them, which is a lie. She still kills them.

She's quick, and to the point with her attacks, acting concisely and without much pattern. She dedicates herself as the distraction most of the time. She will also lunge at her enemies the moment she realizes they have blood inside of them.

These are meant to further clarify what is currently Rylee's state of being.

In around June of 2015, Rylee had contacted a Pure Soul, a few other well-equipped fighters, and a high-ranking vampire. The last, named James, was the leader, and lead them to victory against a tulpa of the Tails Doll, one of their own invention. Rylee had originally tried to clarify, only to be demoted by the Pure Soul. Furious, she and James, the vampire, had taken a stand against them. The group they were once allies with, attacked them without remorse, with James sustaining serious injuries. The two were forced to flee, and hid far away.

On November 10th of 2015, two days after they had rebelled, James' injuries threatened his life. Fearing the worst, and knowing only blood could heal him, Rylee offered herself up, in hopes of saving her friend. It was successful, but now the roles had simply switched. She was on death's bed whilst her friend was faced with an important decision. He couldn't let her die, but he didn't want her to live the life he did. With no time left to decide, he transfused part of his blood, in a ritual that is far too graphic to write, into Rylee, helping her into the first step of becoming a vampire just to save her life.

From her previous personality before recent events transpired, she was cocky and belligerent, resorting to only herself as the main fighter. She often refused help from others as well.

Now, she is more calm in the face of danger, often just using that demeanor to provoke her enemies. She's still quite reckless and bold, mostly too cocky in her abilities, but still keeps a firm grip on herself. She often is rash, doing things that normally shouldn't be done out of her own safety, believing that it won't harm her. She's no longer human, nor can she die by any normal means.

However, she is still able to commit heinous acts solely for a meal.

Retrieved from "https://good-tails-doll.fandom.com/wiki/User:Horizons_are_Limited?oldid=5205"
Community content is available under CC-BY-SA unless otherwise noted.